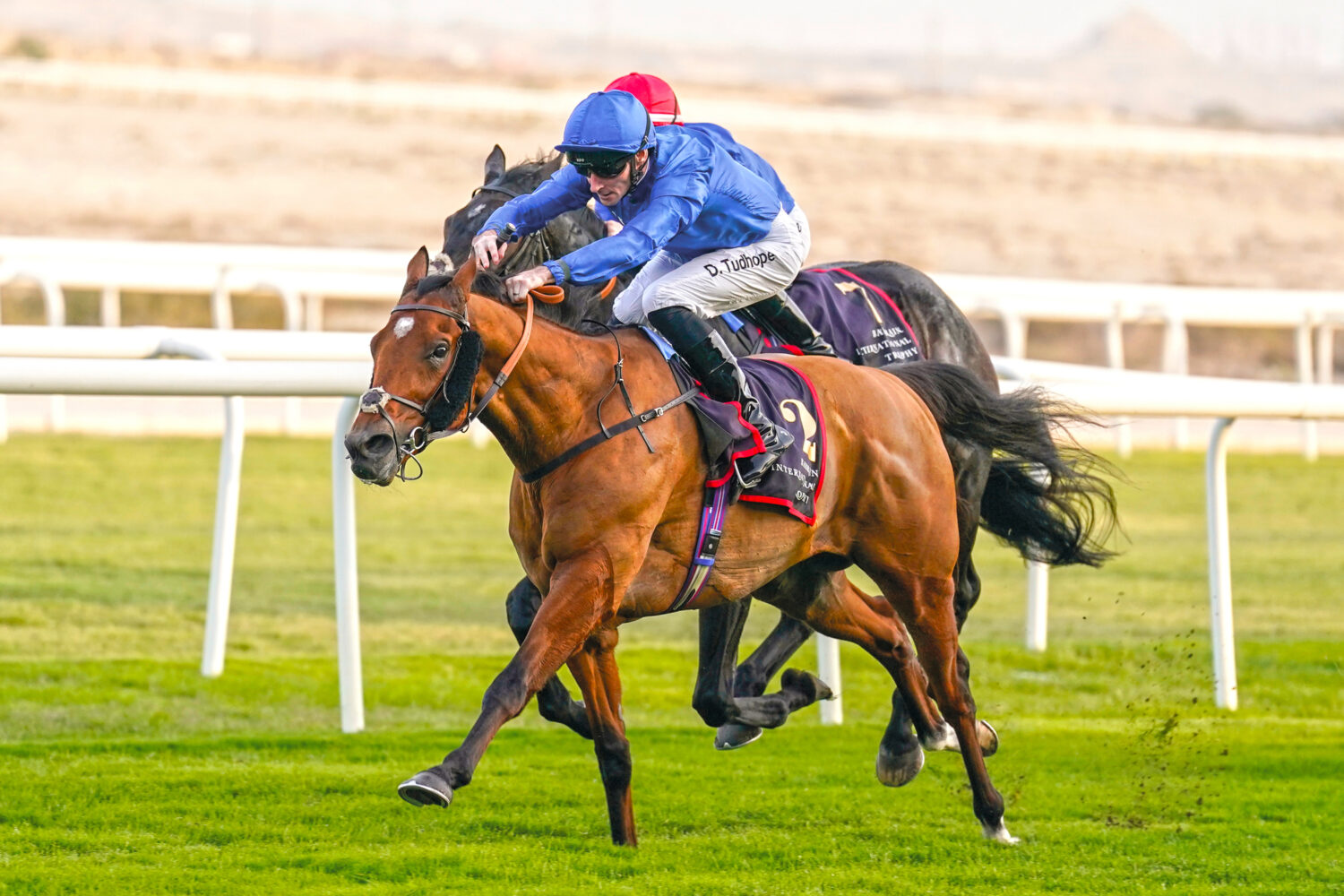 12 months after watching on injured from the sidelines as Jason Watson won aboard Lord Glitters, Daniel Tudhope was celebrating a lucrative, big-race success as he partnered the Saeed bin Suroor-trained Dubai Future to glory in the £600,000 Group 3 Bahrain International Trophy.

Saeed bin Suroor celebrated a 1-2 in the race with Passion and Glory chasing home his stablemate in second. The Carlos Laffon-Parias-trained Ricorvo stayed on late to finish third. bin Suroor has won big races all over the world in a glittering 30 year career, but this win gave him a maiden success in the Kingdom of Bahrain. He said: “This means a lot for us, I have won in most countries in the world but this is the first time in Bahrain and it is great for us.”

Godolphin have had runners in every renewal of the Bahrain International Trophy so far and His Highness Shaikh Isa bin Salman Al Khalifa, Chairman of The Bahrain Turf Club, was thrilled that they have been rewarded by winning this year’s race: “Congratulations to Godolphin for winning the 2022 Bahrain International Trophy, a remarkable race competed by some of the best horses, jockeys and connections in the world. Dubai Future was a well-deserved winner and was given a superb ride by Daniel Tudhope. His Highness Sheikh Mohammed bin Rashid Al Maktoum has supported our race strongly since its inception and we were delighted to see him have success in the race.”

“The fourth edition of the Bahrain International Trophy is built on the tremendous success of the Bahrain Turf Club in staging a high-quality and competitive race annually. Today, the race has cemented its position as one of the most anticipated races in the final phase of the season. With the growing demand in the racing community, we are driven and determined to expand our reach, advance our facilities and host more international races in the coming years. We look forward to the Bahrain Turf Series starting for the second time in December and welcoming more international connections to The Kingdom of Bahrain.”

Before the race, pundits pointed to the lack of an obvious front-runner and so it proved with a sedate early gallop set by last year’s third Magny Cours and Mickael Barzalona. As the field of 10 turned into the straight, Barzalona tried to sprint clear of the field but the Saeed bin Suroor pair quickened past him. Richard Kingscote, who has enjoyed a landmark 2022 with victory in the two most valuable races run in Britain (Cazoo Derby & QIPCO British Champion Stakes), must have thought he was about to win another valuable pot on Passion and Glory, but it was Tudhope’s day as Dubai Future got on top close home and powered clear to win by ¾ length.

After the race, a delighted Tudhope reflecting on winning the race after he missed out a year ago, said: “I was obviously disappointed not to be here last year but it was nice to see Lord Glitters win for his connections. It is great to come back here and I'm just delighted we have won. Thankfully this time it was me!”

Tudhope, who also won the Wolferton Stakes in emphatic style aboard Dubai Future at Royal Ascot in June, continued: “I had a good draw so I was able to park him wherever I wanted to. He doesn’t really need a strong pace but he’s a decent horse on his day and he turned up today. I don’t know what they were like behind me but I was in a nice position to strike first. He travelled super through the race and when I asked him, he picked up well. It’s great to win here in Bahrain as they look after us so well. It’s a great race to win. I rode in it a few years ago and it’s a wonderful place”

It wasn’t just Tudhope who righted the wrong from last year’s renewal, Saeed bin Suroor had been unsuccessful with Dubai Future in 2021, but bin Suroor believed he was a different horse in 2022. He said: “He's improved a lot this year and he won at Royal Ascot. Physically and mentally, he was better than last year and we thought he was the right horse again for this race.”

Tactically the race played out as bin Suroor hoped. He added: “I talked to the jockeys before the race and said it is about how fast they go. When I saw that Mickael (Barzalona) was in front leading, I was relaxed. I told both jockeys not to and to sit just off the race. Both horses like to go a mile-and-a-half but the straight here helped them and they were in a good position. Danny is a good jockey and this is a different class horse since his win at Royal Ascot, we have seen him improve a lot.”

Dubai Future, by winning the race, receives an automatic invitation into the Group 3 Neom Cup on Saudi Cup night and bin Suroor revealed “it was likely” that he would head to Saudi Arabia in February.